After Google unveiled new features to its search results yesterday, one
analyst is saying that the company’s leadership position has become
virtually unshakable. 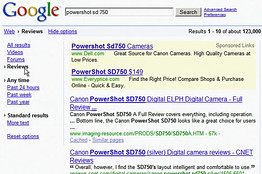 In a research report, Piper Jaffray analyst Gene Munster said that
while the new products — Google Search Options, Google Squared and Rich
Snippets — were “more evolutionary than revolutionary,” they
demonstrated the company’s continued ability to innovate. “The bottom
line is that we expect Google’s continued product improvement to allow
the company to maintain its leadership position in search for the
foreseeable future,” he wrote.

“Google’s longevity as the leader in search is constantly questioned
by investors, bloggers, etc.,” he added. “New technologies and
innovations come with the excitement of potentially dismounting Google.
However, we think the reality of Google’s position atop search volume
looks essentially insurmountable. Any startup wishing to challenge
Google directly not only has to compete with the company’s technology,
but also the company’s brand (a top 10 brand in Business Week 2008) and
the company’s immense CAPEX budget (as high as $840 million in Q1 last
year). We don’t deny that smart startups will develop technologies that
are an improvement to Google’s offering, but we also believe Google has
the resources to catch up quickly and the brand to keep users loyal.”

Google’s name is increasingly coming up in antitrust discussions, and there are signs that regulators are considering whether it is a monopoly. A presentation outlining reasons Google is not monopolistic surfaced on Consumer Watchdog last week.

This also isn’t Mr. Munster’s first provocative note. In January he penned an open letter
to then-new Yahoo CEO Carol Bartz, recommending she buy a news company
such as the New York Times or Gawker. She jokingly expressed interest
in an NYT deal later that month, during her first Yahoo earnings call.

Do you agree with his take? Google has stumbled when it attempted initiatives outside the online-advertising sector, such as radio, but is its search business insurmountable?