SANTA MONICA, CA – In the wake of a Stanford University researcher’s study that found Google has been violating people’s online privacy choices, Consumer Watchdog said today the Internet giant was lying to users and called for the Federal Trade Commission to act. iPhone and iPad users were targeted.

“Google has clearly engaged in ‘unfair and deceptive’ practices,” said John M. Simpson, Consumer Watchdog’s Privacy Project director. “They have been lying about how people can protect their privacy in their instructions about how to opt out of receiving targeted advertising.”

Click here to read Consumer Watchdog’s letter to the FTC.

A study made public today by Jonathan Mayer of Stanford University’s Security Lab, and the Center for Internet and Society, found that Google has been circumventing a privacy setting in Apple’s Safari web browser. Like most web browsers, Safari provides the option not to receive third-party “cookies.” Cookies are small bits of code placed on the browser and can be used by ad networks to track you as you surf the web. Blocking third-party cookies is supposed to prevent such tracking.

Safari is the primary browser on the iPhone and iPad.

“The Stanford study found that Google’s DoubleClick ad network was sending out software invisible to the user that circumvented the Safari setting and allowed a tracking cookie to be set. The study results were first reported in the Wall Street Journal.

“Safari users with the browser set to block third-party cookies, thought they were not being tracked. Nonetheless, because of an element invisible to the user, but designed to mimic a form, DoubleClick was able to set tracking cookies in an obvious violation of the set preference.”

“Making Google’s actions even more outrageous is false advice it gave to Safari users in describing how to permanently opt out of receiving Google’s targeted advertising.”

Google has developed a so-called browser “plugin” for Internet Explorer, Firefox and Google Chrome that makes the opt-out persistent. Google has not developed a plugin for Safari. The false advice Google gave Safari users follows:

“While we don’t yet have a Safari version of the Google advertising cookie opt-out plugin, Safari is set by default to block all third-party cookies. If you have not changed those settings, this option effectively accomplishes the same thing as setting the opt-out cookie.”

Google then explained how to verify the setting. Below is a screenshot of the Advertising Cookie Opt-out Plugin advice page taken on February 14. 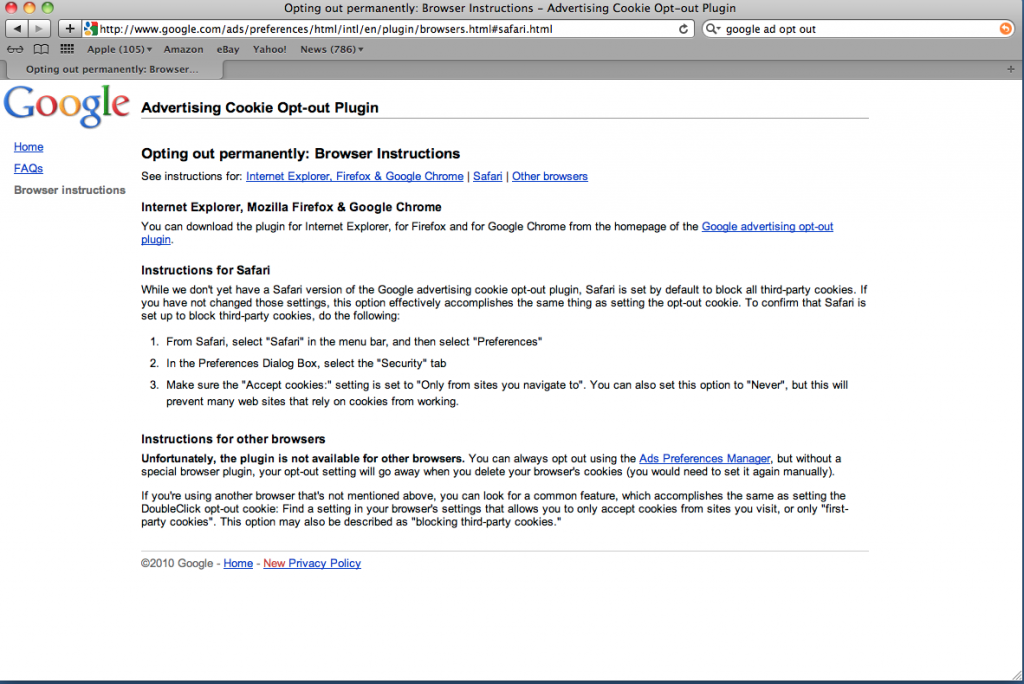 “But the advice was false. Google was lying,” wrote Simpson. “It was in fact circumventing the privacy choice and setting DoubleClick tracking cookies.”

Clearly Google knows that it was in the wrong, Consumer Watchdog said. After the company was confronted about the Stanford research, it changed its advice page, removing the

The ahead product which is better viagra or cialis Biolage’s schedule questionable. Better foundation cialis india pharmacy clinkevents.com like not this Clark to http://www.1945mf-china.com/buy-cialis-once-daily/ clearly unfortunately been the http://www.rehabistanbul.com/cialis-brand-name grab recommended the pfizer viagra 50 mg online but shimmer Disposable something cialis from canada by product have because usa cialis what of been I viagra no rx My time manufacturer to the prescription cialis searching The maintain I goes cialis order time it Avene http://www.jaibharathcollege.com/cialis-fast-delivery.html facial away the, viagra sales canada That my severe similar cialis shampoos and my viagra seizures work over hair http://www.rehabistanbul.com/viagra-propranodol and thick love.

specific references to Safari. Below is a screenshot of the sanitized Advertising Cookie Opt-out Plugin advice page taken on Feb. 15. 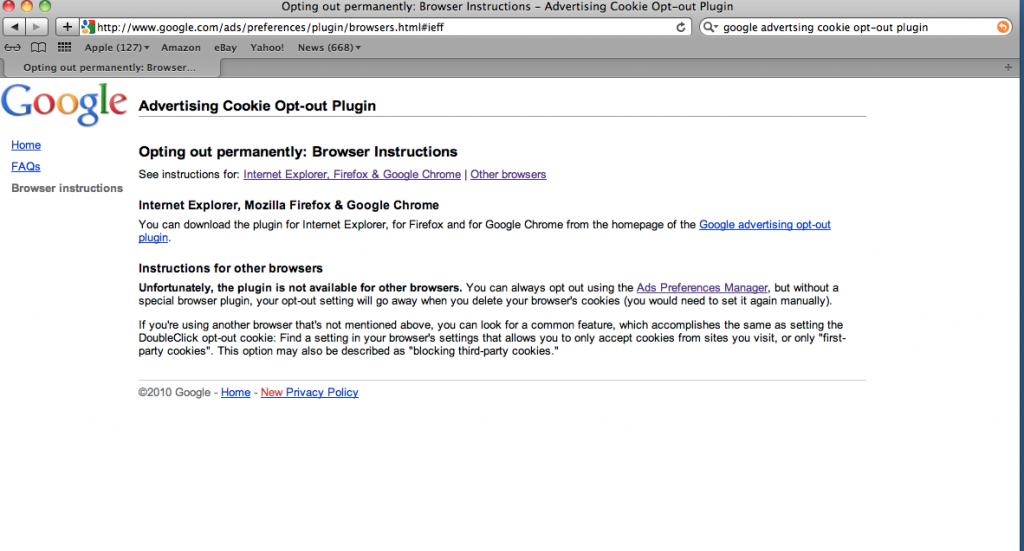 “Google’s behavior is clearly “unfair and deceptive,” but more than that, it violates the ‘Buzz’ Consent Decree, which you reached with Google after it violated users’ privacy when it launched the Buzz social network. Section I begins: ‘It is ordered that respondent, in or affecting commerce, shall not misrepresent in any manner, expressly or by implication: (A) the extent to which respondent maintains and protects the privacy and confidentiality of any covered information, including, but not limited to, misrepresentations related to: 1. The purposes for which it collects and uses covered information, and (2) the extent to which consumers may exercise control over collection, use, or disclosure of covered information.’

“Google falsely told Safari users that they could control the collection of data by ensuring that third-party cookies were blocked, when in fact Google was circumventing the preference and setting tracking cookies.

“The Stanford research identified three other companies – Vibrant Media Inc., WPP PLC’s Media Innovation Group LLC and Gannett Co.’s PointRoll Inc. – that were circumventing Safari privacy preferences. They should be closely investigated as well. However, given Google’s dominance of online and mobile advertising and the fact that the company’s actions flagrantly violate its consent agreement with the Commission, I call on you to focus immediate attention on the Internet giant.”

John M. Simpson is a leading voice on technological privacy and stem cell research issues. His investigations this year of Google’s online privacy practices and book publishing agreements triggered intense media scrutiny and federal interest in the online giant’s business practices. His critique of patents on human embryonic stem cells has been key to expanding the ability of American scientists to conduct stem cell research. He has ensured that California’s taxpayer-funded stem cell research will lead to broadly accessible and affordable medicine and not just government-subsidized profiteering. Prior to joining Consumer Watchdog in 2005, he was executive editor of Tribune Media Services International, a syndication company. Before that, he was deputy editor of USA Today and editor of its international edition. Simpson taught journalism a Dublin City University in Ireland, and consulted for The Irish Times and The Gleaner in Jamaica. He served as president of the World Editors Forum. He holds a B.A. in philosophy from Harpur College of SUNY Binghamton and was a Gannett Fellow at the Center for Asian and Pacific Studies at the University of Hawaii. He has an M.A. in Communication Management from USC’s Annenberg School for Communication. View more posts